Superior moisture resistance and stable R-Value from Foam-Control to protect your insulation integrity. 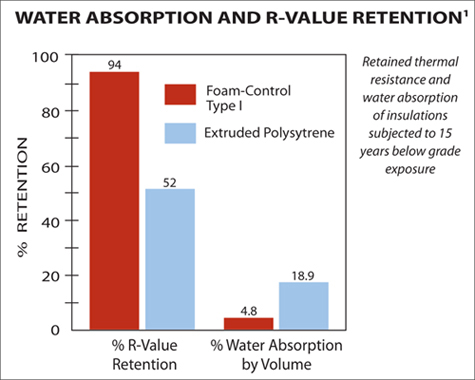 Polyiso and XPS Lose R-value Over Their Lifetime.

Recent Independent testing of below grade insulation has determined the water absorption of Foam-Control and an extruded polystyrene (XPS) product. Samples of molded polystyrene and XPS were excavated from the exterior foundation of a building in St. Paul, MN. The insulation was placed into service in 1993 and had 15 years of use as vertical wall insulation separating the heated building foundation from soil.

The results of the independent testing are dramatic. The molded polystyrene insulation maintained 94% of its stated R-value of 3.6 after the 15 year time period and had a moisture content of 4.8%. However, the XPS retained only 52% of its stated R-value of 5.0. The loss in R-value for the XPS is quite dramatic and can be explained very simply by the 18.9% of moisture absorption over the 15 years of use.

It is apparent that moisture that migrates through the soil, insulation, and foundation system is trapped in the cell structure of XPS. In contrast to the XPS, molded polystyrene is maintaining an equilibrium condition with the adjacent soil and is not accumulating water over the life of the building.